Here’s local radar. Look for scattered thunderstorms to slowly work through the Augusta / Western Nelson areas through the evening hours. Most people won’t see rain, but in isolated areas look for heavy downpours, and some frequent lightning. Skies wil be mostly cloudy overnight. 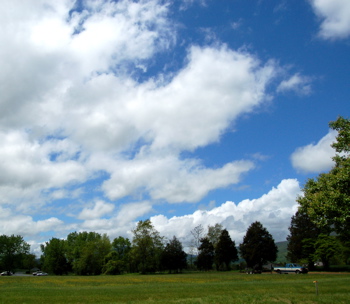 It was a pretty day Monday with temps in the upper 70’s and low 80’s across the area. Here at NCL-Nelson County Life Magazine we reached a pleasant high of 82 degrees on Monday. Upon the mountain at NCL-Wintergreen Nature Foundation they reached an afternoon high Monday of a nice 77 degrees. To our east in Lovingston at NCL-Tiger Fuel they reached a Monday high of 82 degrees as well. Just up Route 29 in Hickory Creek in Faber, NCL-Delfosse Winery reported an afternoon high on Monday of a slightly cooler 79 degrees. Finally back SE at NCL-Mini Tara Vineyards in Arrington, Mike Patterson’s station there showed a Monday high of 82. So all in all a nice start to the week.

Today’s current surface map below continues to show that very weak cold front working it’s way south through Virginia today. The front gets stalled just to our south and as long as it’s around it does give us a slight chance of an afternoon thunderstorm. Again, isolated much like Monday afternoon’s lone thundershower in southern Nelson County.
Current-Sat Surface Map

High pressure builds in during the day Tuesday and will pretty much control our weather through the remainder of the week. The frontal area mentioned above hangs around today slightly south and again gives us that chance for a very isolated thunderstorm. But the building high pressure gives us plenty of sun and warm temps.
Today’s Forecast Map

Today look for partly sunny skies with that chance of a scattered afternoon thunderstorm. Again, most folks won’t see rain. High temps in Tye River, Wingina, Colleen and Nellysford will be around 77 degrees, perhaps 80 in some locations. On the mountains at Montebello, along the BRP and Wintergreen, look for afternoon highs to top out around 72-75 degrees. Winds will be light SE. Tuesday night we’ll see some clouds left over from any isolated storms with lows valley in the low 50’s – mountains about 50 degrees. Winds will be south about 5 MPH.

The rest of the week looks generally the same with highs in the mid and upper 70’s reaching low 80’s by Friday, with lows in the 50’s. The next chance for any real thundershowers looks to be Memorial Day (next Monday) For now the upcoming holiday weekend looks great with partly cloudy skies and temps Sat in the low 80’s and mid 80’s by Sunday. A perfect looking weekend so far…but remember what those extended forecasts can be…a crap shoot! I’ll examine the latest data as we get closer, we should have a much better grip on the weekend by Wednesday.