Wow, what a great weekend! Temperatures were great over the weekend in the 70’s Saturday and around 80 on Sunday. 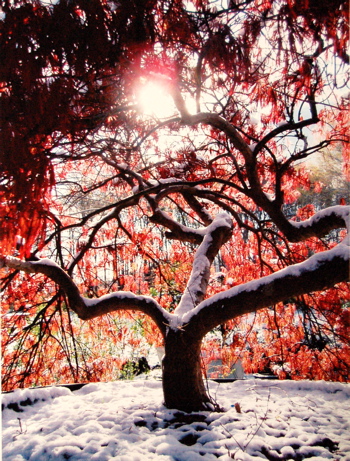 Take a look at this shot Mariah Custalow took yesterday of this Japanese Maple covered in snow at Riverside Nursery in Spruce Creek. Ok, I am fooling. This was one of the last snows we had here a few weeks ago.

Compare that to the shot just below. I took this one of the same tree yesterday at Stan Driver’s place (Riverside) with plenty of sunshine and warm temps. Glad we won’t be seeing any snow for a long time! But what a beautiful tree! 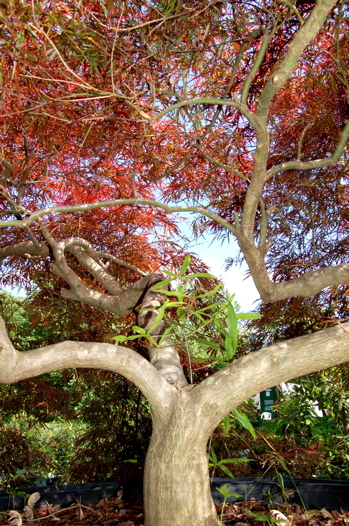 On the current surface map below a very weak cold front is working it’s way south through Virginia this morning. It’s not very strong and other than some passing clouds Monday morning it won’t have much effect.
Current-Sat Surface Map

The forecast map below shows the front or what’s left stalling south of Nelson along the NC-VA border. With that boundry nearby it’s possible we could see some showers, maybe a thudershower in the afternoon hours with daytime heating, but the best shot are points south of Nelson.
Today’s Forecast Map

For Monday look for partly cloudy skies with a chance of a scattered afternoon thunderstorm. Again, this would be rare, but not out of the question. High temps in Faber, Shipman, Roseland and Piney River will be around 78 degrees, perhaps 80 if the clouds stay thinned out. On the mountains at Montebello, the BRP and Wintergreen, look for afternoon highs to top out around 67 degrees. Winds will be light NE. Monday night we’ll see some clouds passing by from time to time with overnight lows valley in the low 50’s – mountains about 50 degrees due to the clouds in place. Winds will be light and variable from the south.

Tuesday the nice weather continues with highs a little cooler in the mid 70’s valley and upper 60’s mountains. Skies will be partly cloudy with light SE winds. Tuesday night look for temps to be in the mid 50’s valley with SE winds of 5-10 MPH and mountains around 52-53 degrees.

The rest of the week looks about the same with highs generally in the mid and upper 70’s with lows in the 50’s. The next chance for any real thundershowers looks to be Saturday and that looks to be very scattered at this point and not very organized thus far.

Have a great Monday!
Tommy