We got this from Jennie just moments ago:

Hello again from a very somber Blacksburg, Virginia.
I wrote yesterday as comments to the story about the shootings here at Virginia Tech. The things I wrote on the Nelson County Life site were apparently picked up by a website, cybersoc.com, that was picked up by website that was picked up by CNN. This will act as a continuation of that.
I wrote yesterday that I had heard rumors of a friend that had been shot. Unfortunately, the rumors were true. Ryan “Stack” Clark was killed yesterday in West Ambler Johnston, a dorm on the Virginia Tech Campus. He was an RA on the fourth floor where the first shooting happened just after 7 yesterday morning. He and I were in the Marching Virginians together and he was the first person I met on the Virginia Tech campus. There is a nice tribute to him on the MV website.

Jennie’s essay was first published on BickLickU.com. Read it here.

You’ve heard us refer to Jennie Tal a lot over the past several days. Jennie is special to us. She’s the transcriptionist for Nelson County Life Magazine. That means when we go out and interview someone, she’s the person that takes that audio file, types it out word for word, then returns it to us. We then write the stories you see in NCL from that. We call that verbatim in the biz! She’s also the daughter of Leslie and Rafael Tal, owners of The Mark Addy Inn B & B in Nellysford. We saw them Tuesday night, and like any parent with a youngster at VT, they have been very concerned over the past several days, but thankful their daughter is unharmed.

Jennie is also a senior communications major at VT. If you’ve been reading this blog over the past several days, Jennie broke the story reagrding the number of fatalities at VT. Early on was she was live blogging here on NCL and alerted us and you that it could be much worse than originally thought. Here’s the line that got everyone’s attention worldwide.

“Unconfirmed, I have heard that at triage there were more than 30 â€œblack tagsâ€ at triage. That means body bags. I hope thatâ€™s not true.”

We get no joy out of the fact she was right or the fact she beat all of the major media, but it does show Jennie has a promising career in journalism should she choose to head that direction. In a day when media gets the facts wrong, often, Jennie got it right. Excellent job!

Tuesday night she was interviewed on News Hour with Jim Lehrer.

This is a screen grab of her from Tuesday’s interview: Courtest of PBS – News Hour with Jim Lehrer: 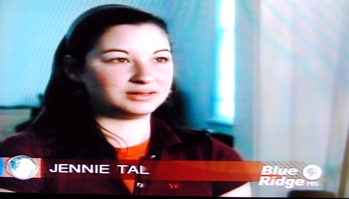 Unfortunately the recent string of events is all too familiar to Yvette and me. Back in the fall of 2003 a few months before we moved here to Virginia, one of the last stories we covered on television news in Tennessee was a similar event. Though nothing as tragic as VT, it was a 12 hour ordeal that was just as nail biting. 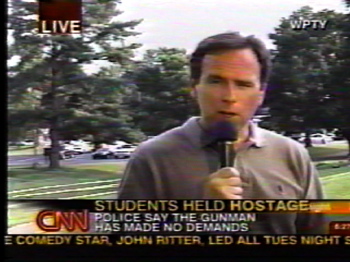 The above shot is one of many live shots I did that day for networks from the scene. In this case a man with a gun took an entire math class hostage for the day. As luck would have it, Yvette and I were the only reporters nearby. We were off and on our way to a favorite Mexican restaurant when we got the info from a police contact of mine that the place had been put on lockdown and a man with a gun was inside. For hours we did live coverage by ourselves from the scene. Other media arrived late in the day.

Eventually the gunman inside began shooting students, the police rushed the building and shot him dead, rightfully so. That day ended 12 hours later. Three student were shot and airlifted out, but thankfully they survived. No others were injured. It’s a day we will never forget and when something like VT happens you are reminded even more…..
-T-