Tuesday I spent much of the afternoon out at Delfosse Vineyard and Winery relocating the NCL-Delfosse Winery Weathernet station. It was too near the actual vineyard so we wanted to get it out of the way before the spraying season begins. Was a near perfect afternoon to make the move. Mike Patterson helped me get everything moved and relocated.

While I was out there I began talking to Grayson, the vineyard and farm manager. He was meeting with a vineyard consultant. Back in Tennessee this was equal to our version of a cotton scout. The guys who would look over your specific crop and assess the damage either from weather or insects. He’d then make suggestions on things you could do to minimize their effects.

In this case the past week or so of freezing temperatures have been terrible for vineyards around the area. And we’re not talking about a night or two, but five straight nights of really cold temperatures. 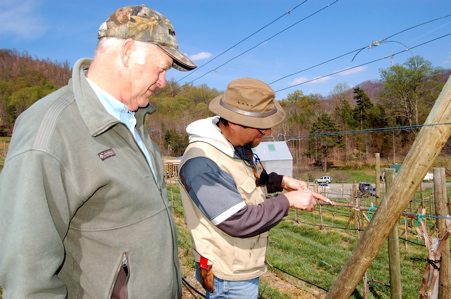 In the photo above, Chris Hill, vineyard consultant from Covesville, and Delfosse vineyard and farm manager, Grayson Poats, look over recent damage to some of the vines.

“Certain varities are hit very hard, and some aren’t hit so hard. Chardonnay is hit very hard,” says Hill. He says it is the first variety that comes out and anything that was already out got hit pretty hard. “Essentially the vine gets to take the year off,” continues Hill. Though the vines continue to produce vegitation, the damaged shoots will not produce fruit. In this case grapes. 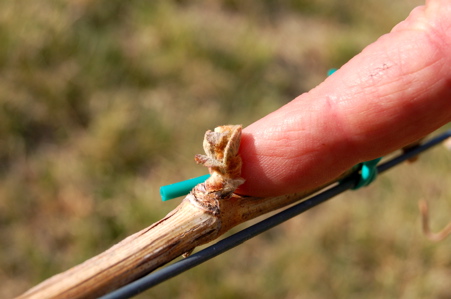 This photo shows a vine shoot totally destroyed by the freezing temperatures. When touched they simply crumble into dust. 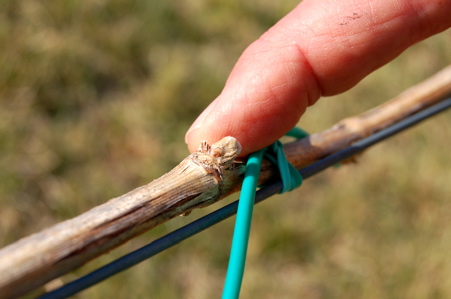 This is an example of a vine shoot that has not been damaged. Hardly any of the “bud” was exposed so it will mature properly if no other freezing temperatures come later.

“I don’t think anything escaped entirely. We’ll just have to wait and see how severe it is. But it’s pretty bad. We’ll have fruit in the vineyard, we just won’t have as much as we wanted,” says Poats.

The good news, it won’t affect anything you’ll buy this year in the wineries. That crop is alreay made from previous years. It will be 2008 when winemakers across the state will be faced with possibly either buying grapes elsewhere or limiting production.

The full extent of the damage won’t be know for several more days or perhaps a couple of weeks.