Ok as mother nature can do, she has this time, thrown me a curve. When it happens I admit it. I missed the chance that mountain temps wouldn’t warm enough to avoid snow up there. Sure enough our photographer and Wintergreen mountain resident, Paul Purpura just sent these to us. Snow! When will spring ever make her mind up…ok, it could be a man too! As of this post our NCL-TWNF Weathernet station shows a temp of 29 degrees.

Here’s three of Paul’s photo’s shot just a few ago: 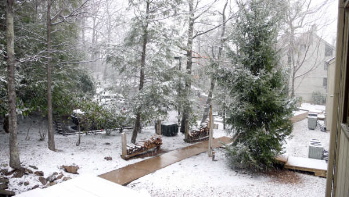 These are shot at Three Ridges Condos just above the mountain inn. 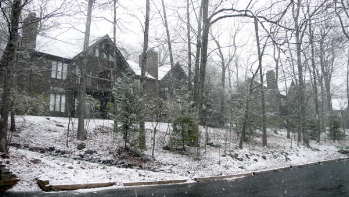 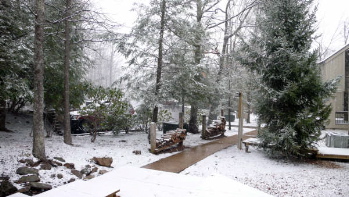 So as you can see, spring can be a fussy time of year. Yvette says it can’t make up it’s mind. Yea! It’s spring.

I will have much more posted later today including some things to get you in the mood for warmer weather!

Thanks Paul for a quick turnaround on the winter pics from the mountain!

Quick update this morning before I head out the door to take some pics at the Rockfish Airpark.

Today will be cloudy witrh rain showers developing throughout the day. Rain becomes more widespread this afternoon and tonight. We may even heard a clap of thunder from time to time, though I think most of the thundershowers will be confined to points SW of Nelson. The dynamics are not in place here for much thunder. Highs today aren’t going anywhere much, around the upper 40’s. Without any sunshine we just don’t get any heating to speak of. Tonight rain continues with overnight lows not moving much from daytime highs, around 42 in the valley and about the same on the mountains this time around. Thunder is again a possibility tonight, but not widespread.

Thursday we are left with lingering morning showers giving way to sunshine in the afternoon with temps warming a bit to the mid 60’s with increasing westerly winds in the afternoon. Thurs night we’ll see some clouds passing by with lows falling to the upper 30’s valley and about 30 on the mountains. Friday we still enjoy fair weather and lots of sun and temps in the lower 60’s.

The weekend promises another round of rain, more on this in the afternoon update. We’ll be posting much more stuff later today.

Have a great Wednesday!
Tommy