Well as we discussed last evening the snow fell overnight. We ended up with about an inch of snow here at the office in Greenfield. 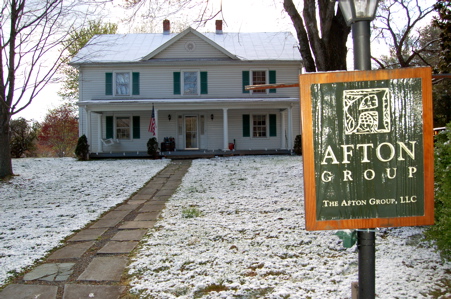 Not overly surprised. The upper level low moved by last night and gave us anywhere from an inch of snow here in the valley to a little more at Wintergreen. I heard from Josh Palumbo at Wintergreen Nature Foundation this morning. He said they got about 2 inches of snow there. We know they got as low as 22 degrees up there last night, but we had a computer malfunction overnight there and don’t have the complete data set. NCL-TWNF
I’d say 22 is pretty close though. You can check out other state and area snowfall totals at this NWS site.

Here at NCL-Nelson County Life Magazine we bottomed out at 29 degrees. The freezing temps have everyone concerned right now. Yvette and I ate breakfast at the Rockfish Valley Community Center’s monthly pancake breakfast this morning and that was the topic of conversation. If you have never eaten there, you should! Great food! It’s always the first Saturday of the month. Stan Driver of Riverside Nursery at Spruce Creek said he’s got some vegitation that’s just started coming out and the tender portions could get bitten by the coming freeze tonight.

Bev and Keith, owners of Basic Necessities, (just back from New Orleans & heading out again Monday!) echoed the same. By the way, if you haven’t visited their blog from New Orleans you should. These guys are something else. In case you don’t know, both of them spend most of their time in New Orleans helping Katrina storm victims rebuild. They have rented a place down there and come back here briefly to regroup, then head back. You can see lots of their pictures and read about what they are doing here

Ray over at Delfosse Vineyard also said one of the plots there reached 26 degress the other night, and I am sure they’ll get pretty low tonight. Not a good scenario when you depend on them for the wine! But again this stuff can’t last for very long, we’re getting way late in the season and warm temps will return again soon. Just look at the flowers, they know! 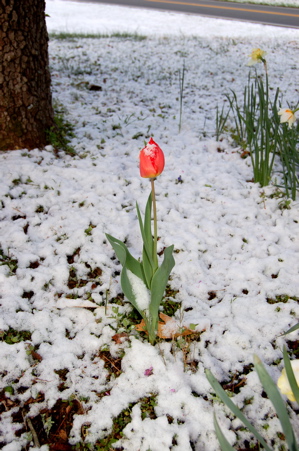 Would like to give a shout out to Linda and Greg Heuer. They had some nice things to say about my forecast overnight:

WOW! Local weather guys hits it right on the button! Looking out on the deck this morning at 5 AM, we see the one inch of snow (as predicted) on top of the table in a neat little donut. Nice work!
On April 7th, 2007 at 5:54 am e

Thanks guys for reading and the nice remarks! That’s why I am forecasting here now, we get much better results with the local data from the NCL Weathernet Stations. This is going to be fun and we appreciate all of the input from everyone!

Ok, on to tonight and the rest of the weekend forecast. Look for mostly sunny skies to work in as the afternoon wears on, but don’t look for much heat. It “ain’t” happening! We’ve already reached our highs for today in the lower 40’s. Temps in the valley will hover in the upper 30’s for the remainder of the day before bottoming out tonight around 20 degrees here in the valley with temps in the mid to upper teens on the mountains. It will be a breezy day today with winds hitting to near 30 on the mountains and near 20 MPH down below.

By Sunday we “start” to moderate a bit. Back around 50 with plenty of sun on Easter Sunday, around 40 mountains. Sunday night lows hit 20 mountains about 28 or so valley. On Monday we make the mid 50’s, same on Tuesday. By Tuesday night a chance of rain is back in the forecast. I don’t see any 60’s out there until late in the week next week. Moderating air looks to be on it’s way around that time. Beyond that I think we begin to warm up nicely.

Thanks again to everyone who’s been visiting out new site. Keep coming back and tell everyone you know about it!

Have a warm Saturday and wonderful Easter. More later in the weekend.
Tommy